What is Eustachian Tube Dysfunction?

But sometimes eustachian tube becomes blocked and air cannot enter in to the middle ear
which causes air imbalance inside and outside the ear.

Increased air load outside the eardrum causes thrusting the eardrum to inner direction which causes pain in the ear. As this eardrum gets strained and the vibration which arises from sound waves cannot sufficiently hit the wall of the eardrum, resultant feeling ofheaviness inside the ear and hearing problem may arise. 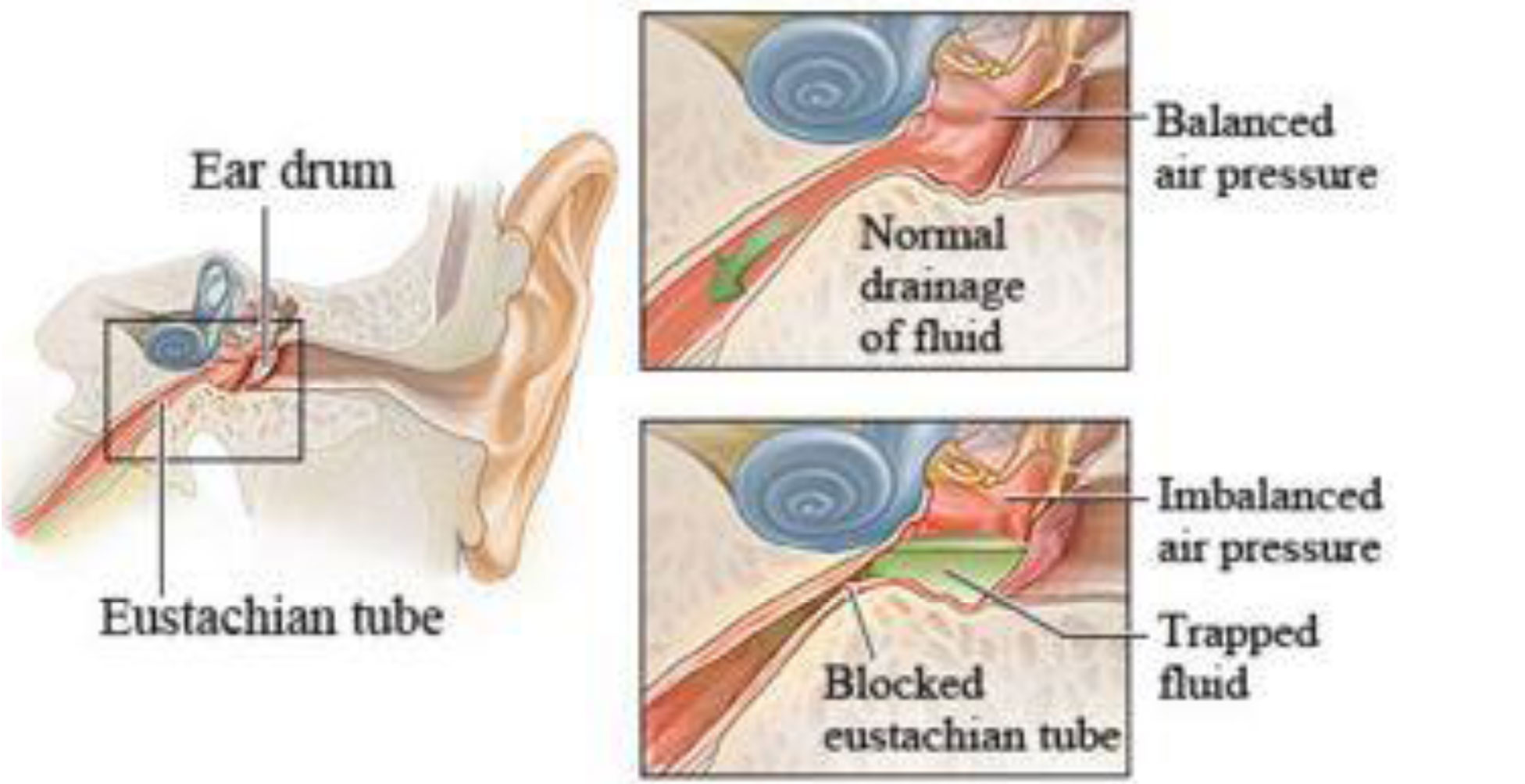 The following symptoms are common with eustachian tube dysfunction:

The above mentioned symptoms may become worsen in high altitude, flying high or duringtravelling by aeroplane or in elevator ridding.

Usually doctors diagnose the dysfunction by asking the question about the symptoms and description of the feeling of the patient. Physical examination of ear tube, ear drum, nasal passage and throat helps in identification of presence of any related infection which can cause blockage of the eustachian tube.

Usually no treatment is required for eustachian tube dysfunction, as they naturally rid off by their own way. If it arises due to cold then improvement of the condition also lessen the eustachian tube dysfunction. Some mild oral exercise helps to relieve the symptoms. Shut your mouth by closing your lips, grip your nose, then gently gust and expel the air through nose. Chewing gum and frequent yawning during travelling to high altitude also reduce the incidence.

Anti allergy drugs
Anti allergic drugs can be recommended in case of frequent allergy attack. These drugs stabilize the mast cells and regulate the histamine release which is often suggested in case chronic rhinitis. These drugs control the nasal congestion and also reduce the inflammation.

Steroidal drugs
In severe allergy which cannot control by other anti-allergic drugs, for them steroidal drugs are suggested. These are having long term side effects and reduce the side effects burden usually recommended formulation is topical nasal spray or drop application. These drugs gradually improve the Eustachian tube problems, as it subside other related inflammatory condition.

This is a surgical procedure for rectification of the eardrum and eustachian tube structure. Application of this technique helps to replace the tube functioning or eardrum structure and it provides assured result.

This treatment is offered by ENT specialist. If the condition is frequently occurring or chronic eustachian tube dysfunction occurs. Then proper diagnosis is important to correct the problem. Balloon dilatation is an advanced medical technique; it applies if the disorder is associated with congenital disorder, or structural abnormality or pulp formation inside the tube which causes blockage of the tube or narrowing the diameter of the tube. This involves putting in a tiny catheter with a small balloon on the last part of the Eustachian tube through the nasal passage. The balloon is packed with saline water and holds in situate for a short vial in order to widen the Eustachian tube. This techniques is not yet launched in clinical practice, it is under a trial.

Usually this is not a serious health problem, it is only seen in case of acute problem during cold or elevation in the high altitude. Chronic problem arises may be due to severe allergic reaction or congenital narrow diameter of Eustachian tube or length of the Eustachian tube is shorter than the normal. Markedly small Eustachian tube is one of the characteristic of
Down syndrome. Individuals having this problem often complain about ear heaviness, ringing sound inside the ear, mild hearing difficulty. Excessive smoking also spoil the cilia, the hair like structures which brush off all the waxy mucous and wreckage from the middle ear hole to the rear part of the nose from where it may be excreted. Chronic problem and without taking proper measures may cause the following complications: