Superior Semicircular Canal Dehiscence syndrome (SSCD) is a condition that is classically described by sound or pressure induced vertigo, pulsatile tinnitus, autophony and/or hearing loss. SSCD can cause sudden shift in their visual field caused by a loud sound. Sometimes people have similar effect when they bear down, pick up something heavy or strain. SSCD can cause pulsatile tinnitus and is often described as hearing one’s own heartbeat. Interestingly patients have also reported being able to hear their eyes move.

The inner ear contains 5 balance organs in each ear. Three of these organs are sensitive for rotational balance awareness. SSCD occurs when a person is missing a small amount of bone covering the superior semicircular canal. The inner ear naturally has two windows. This creates a “third window” where sound or pressure can unusually transmit through the balance organ. 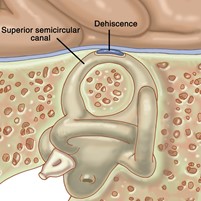 The true etiology of SSCD has yet to be determined. It could be congenital but it also may be due to intracranial hypertension (increased brain fluid pressure). There is also an increased risk in those with migraine.

Obviously when a patient is incidentally found to have a superior semicircular canal no treatment is recommended.

A CT scan is the gold standard test to evaluate for SSCD. This is a highly detailed xray of the temporal bone (skull bone that contains external, middle and inner ear).

To avoid radiation exposure, often times VEMP testing is completed as a screening test for SSCD. There are two options cVEMP and oVEMP. These tests are performed by trained vestibular audiologists. SSCD can produce abnormal VEMP tests because the canal dehiscence creates a path of reduced resistance (ie not a closed system). A cVEMP will have a reduced threshold for response and an oVEMP will have an elevated response to a baseline stimulus.

Once the diagnosis is made, the physician and the patient need to discuss the severity of symptoms. If the patient has undiagnosed migraine it is first, reasonable to treat medically as better control of migraine may alleviate symptoms. Once a patient has exhausted medical options, surgery can be considered. It is very important to understand the risks and benefits of surgery as the treatment. Any manipulation of the inner ear could cause hearing loss, which is the primary risk of the surgery.

The surgery can be completed in one of three ways based on anatomy and goals of the patient.

The least invasive option is to perform “round window plugging”. The procedure is done as an outpatient and is all done through the ear canal. The natural round window is covered with tissue. This procedure does not alter the dehiscent superior canal but improves symptoms by returning to a two window system.

All three options have a low risk of hearing loss. There is also a risk of significant vertigo for a short period of time after the surgery. Some patients require a month to recover but many return to normal activity in a couple weeks.

If you would like to make an appointment: https://soents.com/appointments