The vestibular system is a complex network of neurons. The system is composed of multiple sensory inputs; The balance organs of the inner ear sense rotational, horizontal and vertical motion. When the head moves, the inner ear picks up that sensation in a very precise way. The eyes provide visual input and react reflexively to motion. When either objects in the environment move, or when the head moves, the eyes react. The inner ears and eyes have a special and very fast messaging system between them. The sensation of touch is used to provide awareness of our contact to the ground. In our joints and muscles there are sensors called proprioceptive organs whose job is to let us know about the position and movement of our body partsAll of these systems provide input to the processing centers in our brain.

There are five balance organs in each ear. Three balance organs sense rotational motion, one detects vertical and the other detects horizontal motion. The organs that sense rotation are called semicircular canals. There is an anterior, lateral, and posterior semicircular canal in each ear. These organs have a structure located at one end called the cupula. When we move, fluid within the inner ear moves and the cupula detects this motion and sends a signal, through the vestibular nerve, to the brain. The saccule is the structure that senses vertical motion. The utricle is the structure that senses horizontal motion. The saccule and utricle use a macula which is composed of a gel layer and small crystals known as otoliths. Here the crystals act as a weight on top of the layer of gel and when we move nerve endings within the gel like layer sense motion and send signals to the brain.

The central processing center in the brain primarily uses reflexive systems. The connection between the vestibular system in the eyes is known as the vestibulo-ocular reflex (VOR). The VOR is a complex neural network of nerves, or balance organs of the inner ear and our visual system and eye muscles. The best way to think about the function and relationship of the eyes and inner ear is like a pulley system. For example, if you are focusing on a target and moving your head left to right, the inner ear senses the motion and sends neural impulses to the brain which then sends a signal for the eye muscle to contract reflexively. This allows your vision to remain focused on object despite the head motion. So when the head turns from left to right, the eyes go the opposite direction just as fast and just as far as the head motion. Delay or dysfunction in the system will cause possible dizziness, nausea, or a sense that your vision is off or jumpy in some way.

The other major reflex is the vestibulo-spinal reflex, VSR. This is the connection between the vestibular system and our musculoskeletal system. Again as the inner ear senses motion, the neural impulse is sent to the brain which then sends a signal down the spinal cord and into the arms, legs, and trunk, for certain muscles to contract and others to relax. A functional VSR allows people to respond to changes in their environment, by way of stabilizing the body, adjusting the position in some way, or stepping or reaching out as a protective response. 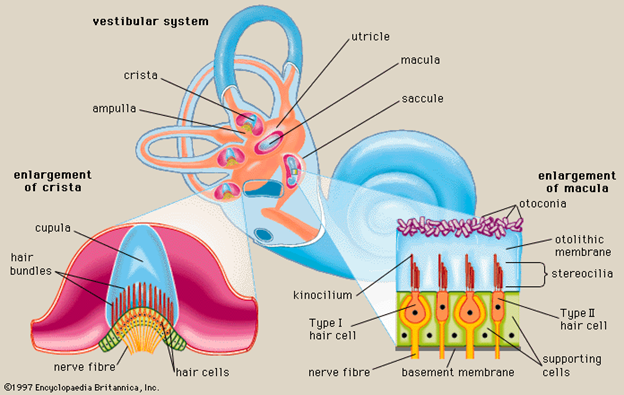